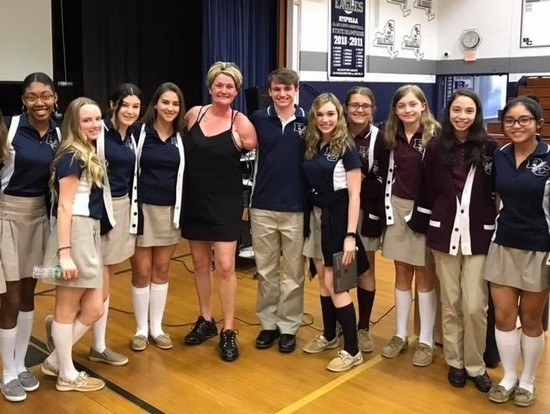 Original Article Via The Chronicle

GOSHEN — Sarah Panzau Evans, a motivational speaker who survived a drunk driving accident that changed her body and her life, spoke to a crowd of 400 students in the John S. Burke Catholic High School gymnasium on Oct. 25.

Her future was bright until one life-altering day. She was an award-winning collegiate athlete with a full scholarship to play for the Southwestern Illinois College volleyball team. She won conference Freshman of the Year honors, was named to seven all-tournament teams, and was a two-time member of the National Junior College Athletic Association woman's volleyball All-American team. But, on Aug. 23, 2003, everything changed.

She was 21 years old the day she left a party and made the irrevocable decision to get into her car and drive home. With a blood-alcohol level nearly four times the legal limit, Evans totaled her car. The accident left her with a severed arm, all but five damaged vertebra, and a jaw broken in seven places. She was given a zero percent chance of surviving her injuries. Evans spent two and half months in a hospital and has undergone more than 30 surgeries since the accident.

Evans is using her second chance at life to educate others on the dangers of drunk driving.

“If these kids want to make that one poor choice of drinking underage, I plead with them not to make the second poor choice to get behind the wheel,” she said. “I think just by looking at me and hearing my story, they will know that I’m living proof of what happens to people who make poor choices.”

“This was, by far, the best assembly I’ve ever attended,” said Holden Lee, a junior. “Her story was sad, but ultimately, it was very inspirational because she is leading a successful life and has overcome the tragedy of her drunk driving accident.”

Evans shared photos of the wreckage, and the guilt she still carries to this day, especially for the pain and fear she caused her family. On the night of her accident, Evans' mother was visited by two police officers who asked her to identify a young woman involved in a fatal accident.

“The students found Sarah’s story very impactful because she is young and was an athlete and spoke to them in an honest, direct way,” said John Douthit, Burke Catholic Principal of Operations. “It’s so important that we provide our students with assemblies like this one because it’s critical for them to understand that one bad choice can have grave consequences.”